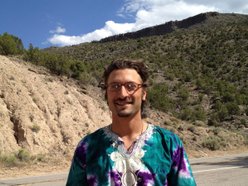 I have 30 years experience in classical music and jazz theory. Studied at the Nice Regional Conservatory in France. Awarded 5 national awards mostly in Marseilles and Paris including one in Valle d’Aosta, Italy and one at Salle Gaveau (where Chopin and Liszt performed recitals)

Currently setting the 1934 WPA Taos Murals to Picturesque tableaux for piano and piano/voice. This would be ideally intended to be performed at the displays of these frescoes in the old courthouse of the Taos Plaza, NM.

As we all sit on tenterhooks and mourn the loss…

Taos Center for the Arts partners with Taos Chamber Music…