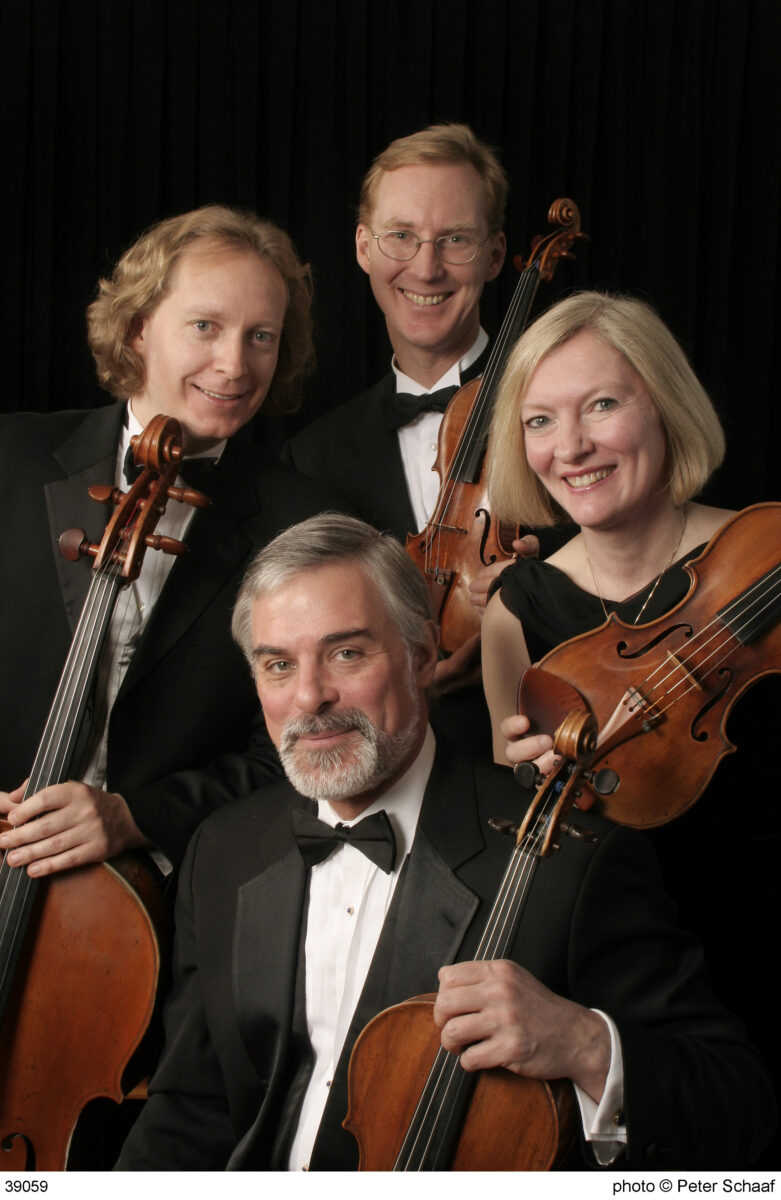 Taos Center for the Arts partners with Taos Chamber Music Group to present the American String Quartet at the Taos Community Auditorium on Thursday, June 2 and Friday, June 3 at 5:30 p.m. for the next concerts of TCMG’s 29th Season.

The ASQ will perform two different shows. The first (June 2) features Beethoven’s String Quartets Opus 74 (“Harp”) and Opus 131 in a belated 250th birthday tribute that TCMG had originally scheduled with the Americans for 2020. The second program (June 3) will include works by Johannes Brahms, Dmitri Shostakovich, George Walker and, with Laupheimer, Wolfgang Amadeus Mozart.

Says ASQ violist Daniel Avshalomov, “For all the reasons you can imagine Taos is one of our favorite places to play. Chief amongst those is that we know most of the audience by name – some have been attending our concerts for decades, and that makes just walking onstage such a comfort.”

When asked to describe their repertoire choices, Avshalomov wrote, “The Beethoven program starts with Opus 74 whose melodic use of pizzicato led to its popular nickname, “Harp.”  It is Haydn seen through Beethoven’s eyes: inspiration in the first movement; devotion in the exquisite slow Adagio; mischief in the scherzo; and finally homage in the last movement.

Op. 131 [the composer’s favorite] was the first one we learned – not that we had the wisdom or maturity to plumb its depths all those years ago, but our instincts guided us to begin studying routes up that particular mountain early on, so that later ascents could be mounted without injury, so to speak. A joy every time.

Speaking of joy – we will open the Saturday program joined by our dear friend and colleague Nancy for a Mozart flute quartet, then on to George Walker’s “Lyric,” an echo of Samuel Barber’s ubiquitous “Adagio,” followed by Shostakovich’s tersest quartet, No. 7 in F# Minor. He conceived of it and the somewhat overplayed No. 8 as a pair, like binary stars whose elements are of different sizes. And finally, Brahms’s A Minor Quartet, Op. 51 no. 2. Brahms, a notorious self-critic, reportedly destroyed countless early quartets, so we’re lucky the A Minor survived the cut. It’s luscious.”

The ASQ – Peter Winograd (violin), Laurie Carney (violin), Daniel Av­sha­lo­mov (viola), and Wolfram Koes­sel (cello) – is internationally recognized as one of the world’s finest quartets. They have spent decades honing the luxurious sound for which it is famous. The Quartet celebrated its 45th anniversary in 2019, and, in its years of touring, has performed in all fifty states and has appeared in the most important concert halls worldwide.

Formed when its original members were students at The Juilliard School, the American String Quartet’s career began with the group winning both the Coleman Competition and the Naumburg Award in the same year.  Resident quartet at the Aspen Music Festival since 1974 and at the Manhattan School of Music in New York since 1984, the American has also served as resident quartet at the Taos School of Music, the Peabody Conservatory, and the Van Cliburn International Piano Competition.

The programs will run approximately 70-75 minutes with no intermission. Tickets are available at tcataos.org/tickets, and more information can be found at taoschambermusicgroup.org.

Reina
Color Pencil Landscapes
Vibrant, ultra-realistic images in color pencil. I apply 3-5 layers of Prisma color pencil on 100% rag paper. My landscapes are saturated with intense color and depth. Even the white of clouds is full of 3 layers of color.
The Americans Return

As we all sit on tenterhooks and mourn the loss…

Youth MediaFest is Sunday at 5pm at the TCA!!!

Youth MediaFest is Sunday at 5pm! Hi All! Well we can't…