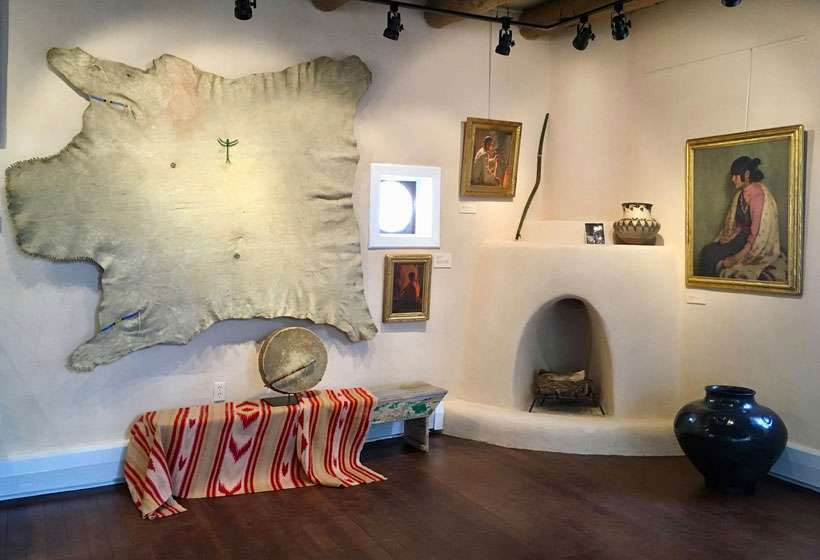 Two visionary painters, whose art captured the Southwest. Explore the studios of E. I. Couse and J. H. Sharp, founding members of the Taos Society of Artists. These two painters helped create the cultural fabric of Taos as we know it today.

The historic Site includes not only the home and studio of E.I. Couse, but the garden designed by his wife, Virginia, the workshops of his son, Kibbey, and the two studios of his neighbor and fellow artist, Joseph Henry Sharp. The Site also reflects the contributions of a long history of previous owners. The Site sits on an escarpment that originally defined the defensive nature of Old Spanish Taos. Occupation of the site began when Juan de Luna built a family chapel there about 1835.  Read More…

The Harwood Museum of Art
The Harwood Museum of Art brings Taos arts to the world and world arts to Taos.
Millicent Rogers Museum
Whether your tastes range from prehistoric pottery to contemporary jewelry, the MRM is the place to experience all the cultures of the Southwest and under one roof. As you walk through our twenty galleries and exhibition spaces, you too will make your own discoveries about the heritage of the Hispanic, Native American and Anglo arts of the Southwest.
Taos Art Museum at the Fechin House
The Taos Art Museum opened in 1994. Eight years later it moved to the beautiful and historic Nicolai Fechin home. The Museum is dedicated to the art of early twentieth century Taos. The museum is housed in the studio and home that artist Nicolai Fechin built for his family between 1927 and 1933. Fechin, born in Kazan, Russia in 1881, carved and molded the adobe buildings into a fascinating, harmonic marriage of Russian, Native American, and Spanish motifs. Fechin's heirs have entrusted many of his art works to the care of Taos Art Museum.
2022 Banner Information
Artist Network Menu
Artist Network Categories
Search by Tag
abstract assemblage black & white ceramics collage college composition fiber found objects furniture giclees impressionist jewelry landscape mixed media monotypes murals music nature oil painting painting photography plein air poetry pottery prints readings scenic songwriting still life taos galleries watercolor weaving writing
Copyright © Taos Arts Council. All Rights Reserved. 2022 Site by TWD
Back To Top