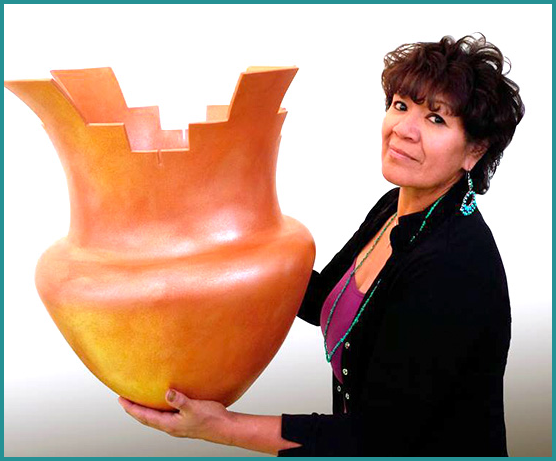 We are pleased to announce the 2022 Taos Arts Council Nominee Angie Yazzie of Taos Pueblo has been chosen as one of the Governor’s Awards for Excellence in the Arts recipients!

Santa Fe, NM – New Mexico Department of Cultural Affairs (NMDCA) and New Mexico Arts (NMA) are proud to recognize a diverse group of worthyindividuals for the 2022 Governor’s Awards for Excellence in the Arts.

The Awards, now in their 48th year, were created to celebrate the extensive role that artists and their work have played in New Mexico. This year’srecipients represent the extraordinary diversity of New Mexico’s rich cultural heritage. Recipients range from artists working traditional andcontemporary forms, to an architect dedicated to preserving historic design perspectives, to arts supporters who ensure their communities have the placesand spaces creative individuals need to thrive.

“New Mexico is proud to be the home of incredibly talented artists that bring our state’s unique culture to the rest of world,” said Gov. Michelle LujanGrisham. “This year’s recipients are consummate professionals in their respective media, and I congratulate them on joining the ranks of this esteemedgroup.”

The 2022 Awards recipients are:

Julia M. Barello of Las Cruces, a nationally and internationally recognized visual artist, as well as past Academic Department Head and RegentsProfessor at New Mexico State University (NMSU) where she oversaw the design of Devasthali Hall, the new home of NMSU’s Department of Art andUniversity Art Museum.

Eva Enciñias of Bernalillo, who has devoted her life to building a home for flamenco in the United States as the founding director of the NationalInstitute of Flamenco, where she directs programming and teaches flamenco dance classes.

Arthur López of Santa Fe, a contemporary wood santero sculptor whose work pushes the boundaries of traditional santero art. He has been exhibitedinternationally, including at KOHI-Kulturraum in Karlsruhe, Germany, and LAProjects in Landshut, Germany.

Beverley Spears of Santa Fe, an architect with an abiding interest in the preservation and celebration of historic elements in design. Her award-winningfirm specializes in sustainable commercial and residential design, urban design, and historic preservation.

Tom and Bev Taylor of Farmington, arts supporters who have committed their lives to making space and building communities for artists in Farmington,including renovation of the historic Lumber and Hardware building into a vibrant arts center as well as making several donations to buildings aroundFarmington.

Rosemary Wilkie of Carlsbad, a saddle maker of 20 years who started her work through the NMA Folk Arts Apprenticeship program, and who isdetermined to guide future generations of saddle makers and help keep the great arts of the past alive.

Karen Yank of Golden, a celebrated sculptor and public artist whose rigorous geometric style has been influenced by Alexander Calder and her mentorAgnes Martin.

Angie Yazzie of Taos Pueblo, an award-winning micaceous clay potter taught by her mother and grandmother, has work featured in the permanentcollections of Museum of Indian Arts & Culture in Santa Fe, the Smithsonian Institute in Washington, D.C., and others.

The Governor’s Awards for Excellence in the Arts are presented by the New Mexico Arts Commission (NMAC) and NMA, the state arts agency and adivision of NMDCA. Recipients are recommended via a public nomination process before being reviewed by a selection committee of NMACCommissioners and NMA staff. A noteworthy group of organizations, painters, weavers, sculptors, dancers, musicians, storytellers, poets, actors,playwrights, and potters have been honored by the Awards with past awardees including Tony Abeyta, Dr. Ramarkrishna and Ammu Devasthali, Gustavo

More about the 2022 Awards recipients

Julia Barello served as Academic Department Head and Regents Professor of Art in the New Mexico State University Department for the last 11 yearsand oversaw the design and move into the Devasthali Hall She recently retired but remains a practicing artist. She creates multi-layered, large-scale wallinstallations, which are made of recycled medical imaging film translated into intricately cut, semi-transparent shapes. Barello’s work has been exhibitedinternationally at the Kaohsiung Museum in Taiwan, Museum Angewandte Kunst in Frankfurt, Germany, Castello Sforzesco in Milan, Italy, and others,as well as in numerous national venues. Her work has also been collected by the Museum of Arts and Design in New York and is on permanent display atinstitutions including Boston Children’s Hospital, Dartmouth Hitchcock Medical Center in New Hampshire, and BioMarin Pharmaceutical Inc. inCalifornia.

Eva Enciñias has devoted her life to building a home for flamenco in the United States and for introducing Spain (the birthplace of flamenco) and thelarger world to the incredible flamenco created in New Mexico. As a dancer and instructor Enciñias’ tenacity has rippled throughout generations.Enciñias founded the National Institute of Flamenco in 1982, creating varied flamenco programs, including Festival Flamenco Alburquerque, a world-class flamenco festival that has been awarded distinction from Spain as one of the premier flamenco festivals in the world. Throughout her career,Enciñias has touched thousands of lives through her generous sharing of flamenco. Her work has been recognized with many awards, including aninduction into El Orden de Isabel la Católica, an honor bestowed upon her by the King of Spain, Felipe VI. She continues to teach flamenco danceclasses, teaching the grandchildren and great-grandchildren of the children she taught in the 1970s and 1980s.

Arthur López was born and raised in Santa Fe and is proud to be working in the long tradition of New Mexico santero artists. A key desire of his is totranscend the bounds of the traditional santero art and use his art as a medium for expressing the full range of his culture and the world around him. He isa 2019 United States Artists Fellow in Traditional Arts and in 2017 he received The Folk Art Society of America’s Award of Distinction for giving thesantero tradition a contemporary style and being a leader in design and meaning. In 2015 he was awarded the City of Santa Fe’s Mayor’s Award forExcellence in the Arts. His work has been exhibited internationally at the 21st Century Museum of Contemporary Art at the 2nd International Triennial ofKogei, when the theme was “The Arts Grounded in Region,” as well as a part of “Song of the West” at KOHI-Kulturraum in Karlsruhe, Germany and“The Saints From a Land So Remote” from LAProjects in Landshut, Germany.

Beverley Spears, FAIA is a practicing architect, landscape architect, and a longtime resident of Santa Fe. Her abiding interest in preservation andcelebration of historic elements in our built environment has resulted in two published volumes: American Adobes (UNM Press, 1987) exploresvernacular architecture throughout Northern New Mexico and Early Churches of Mexico: An Architect’s View (UNM Press, 2017) presents a refreshingnew look at the sixteenth century church complexes built in central Mexico. In 2002, Spears was elevated to the national College of Fellows of theAmerican Institute of Architects, and in 2003, the Old Santa Fe Association honored her “for her contributions to the character and traditions of SantaFe.” Spears Horn Architects, her architecture firm, has received numerous design awards from the city of Santa Fe, the state of New Mexico, and theAmerican Institute of Architects.

Community creativity and public service are integral to Tom and Bev’s lives. They studied art, art history, and architecture at University of New Mexico,and designed and built their own home. After that, they were determined to find ways to support the arts communities and organizations in Farmingtonthey were a part of. Their renovation of the historic Lumber and Hardware building into a vibrant art center was a key aspect of that effort. Other projectsinclude the donation of the hand carved doors for the children’s reading room at the Farmington Public Library and the renovation of the historic TotahTheater.

Rosemary Wilkie is proud to be the first of three generations of women saddle makers, followed by her daughter-in-law and granddaughters. Wilkie gother start when her 5-year-old son had an ornery pony and a saddle in need of repairs; she used whatever materials were available, even the top of an old

boot. When she purchased a sewing machine, an unmade saddle, and other tools from a former saddle maker, he explained what the tools were and howto use them. Through the Folk Arts Apprenticeship program, a program conducted by the state arts agency NMA, Wilkie started as an apprentice andworked her way up to becoming a mentor, determined to guide future generations of saddle makers and help keep the great arts of the past alive.

Karen Yank has established herself as one of the most collectible sculptors in the U.S. She has been commissioned to complete some of the largest publicsculptural works in the Southwest, and her sculpture has been exhibited in numerous museums. Yank received her MFA degree from Rutgers Universityand her BFA from the University of Wisconsin in Madison. Yank’s mentor was the contemporary artist Agnes Martin, who is well known for herminimalist grid paintings and drawings composed of horizontal and vertical lines; Yank adopted the circle in her own work, as her more organic signatureshape. Her sculptures are included in numerous museum and public collections, including the New Mexico Museum of Art, New Mexico State CapitolArt Collection, NMSU Art Museum, Albuquerque Museum, and the Cedar Lake Contemporary Ballet in NYC.

Angie Yazzie (Taos Pueblo) is an award-winning potter of micaceous clay. Introduced to traditional pottery techniques by her mother, Mary Archuleta(Taos Pueblo), and grandmother, Isabel Archuleta (Taos Pueblo), Angie was invited to a convocation of Master Potters at the School for AdvancedResearch in 1994, leading to the book All That Glitters. Yazzie’s work is famous for slender walls and unique shapes. Her work has been exhibited atnumerous museums and appears in the permanent collections of Museum of Indian Arts and Culture in Santa Fe, Smithsonian Institute in Washington,D.C., Millicent Rogers Museum in Taos, Cincinnati Museum, Crocker Museum in Sacramento, and the Wheelwright Museum in Santa Fe, as well as thevault of the School for Advanced Research in Santa Fe.

New Mexico Arts is the state arts agency and a division of the Department of Cultural Affairs. New Mexico Arts administers the state’s One Percent forPublic Art program, awards grants to nonprofit organizations for arts and cultural programs in their communities across the state, and providestechnical assistance and educational opportunities for organizations, artists, and arts educators throughout New Mexico.

Sculptor, Artist sfantastic@gmail.com I am an indigenous artist from the…